"For Strathcona County councils, the community, and organization, the impact of going through this journey has been immense. There is a new conversation being held between the public and elected officials. In a way never seen before, the organization can now share with council members and the community the details of how resources have been allocated to achieve success in identified priorities."

Strathcona County, Alberta, Canada, has been leading the way in priority based business planning and budgeting. As the first municipality in Canada to implement online PBB, this has resulted in Strathcona County being more proactive, strategic and effective in program and service delivery. 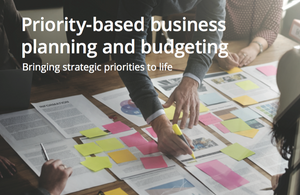 Strathcona County’s PBB budget process provides a tool for allocating resources within a broader and all encompassing Strategic Plan and Business Planning framework. This is the most comprehensive integration of PBB within a policy-guiding Strategic Plan, and a Business Plan designed to drive organizational excellence.

Priority based business planning and budgeting provides valuable information that supports decision-making by directors and managers, enabling them to allocate or reallocate resources, based on each program or resource request’s alignment to strategic and corporate priorities. It can also be used by the organization to set targets and determine how resources are aligned, based on priorities.

PBB is a resource allocation tool that depends on strong policy vision and direction, and a mechanism to infuse policy into operations – Strathcona County’s implementation has set the bar at new heights in this regard.

In 2017, Strathcona County was honored by the Canadian Association of Municipal Administrators (CAMA) with a 2017 Professional Development Award in the 20,001 to 100,000 population category. The award recognizes the county's priority-based budgeting (PBB) approach to business planning and budgeting.

And now Strathcona County has been recognized once again for their ongoing and evolved leadership. Municipal World, a Canadian media brand that has worked to connect municipalities with the information, products, services, and people they need since 1891, recently published a feature story in their June 2018 magazine (Priority based business planning and budgeting). This feature was written and submitted by Kelly Rudyk, Director – Corporate Planning for Strathcona County, where he has worked for 28 years.

The full article is provided below with permission from author & PBB all-star Kelly Rudyk.

Most municipalities have a strategic plan that sets a longer term direction for municipal resources, responding to the desires of both community and council. These plans are crafted with varying degrees of public engagement, council focus, and administrative facilitation and support. Once the plan is in place, however, many municipalities have been forced to ask themselves some tough questions. Has the strategic plan been used to truly allocate the resources of the organization and ultimately achieve the goals embedded within? To that end, how well have the goals within the plan been created? Are the goals well understood by all stakeholders? Are they supported by key results to ensure progress is gauged and being reported? And, perhaps most importantly, have them been prioritized to facilitate a conversation on maximizing value?

These questions should be of the utmost importance throughout the process. Even after the plan is created, they serve an important function in reporting progress and demonstrating accountability. The biggest generator of revenue for municipal service delivery is taxes. If one starts by assuming the public has an overwhelming desire to keep taxes at a reasonable rate, maximizing value with those taxes should be a driving influence on resource allocation. And, to determine where the most value is achieved, a prioritization effort is essential to help determine where resources provide the best “bang for the buck.”

In 2017, Strathcona County was recognized as a best practice by the Canadian Association of Municipal Administrators (CAMA) in the area of priority-based business planning and budgeting. Below is a summary of steps taken, leading to this honour.

Strathcona County council completed an organizational review in 2012: the “Pursuit of Excellence.” Among the recommendations embedded within this review was a call to improve council’s strategic plan – to make it a living document that drove decision making, as well as enhanced business planning within the budgeting process. Initially, efforts made to rectify these noted deficiencies were completed in isolation. The county hired a consultant to work with council to improve the strategic plan. A separate process led to another consultant recommending a way forward with the business plan and budget relationship. 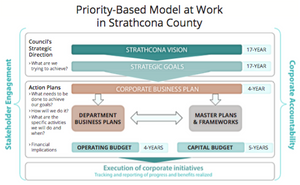 In April 2013, council developed and adopted a new strategic plan, embracing the document as their vision for the future, and sharing it with the community and administration. Yearly budgets were seen as instruments by which to measure and assess progress on the strategic plan, because work on a new business plan and budget process was not yet completed.

The review of the business plan and budget process yielded a recommendation to adopt priority-based budgeting (PBB) as a methodology to evolve the process. The idea was to move from having the budget itself drive decision making, to an environment where progress in areas of priority took precedence over merely balancing a budget. As emphasis shifted from the budget to the strategic plan and business plans, work began internally to determine how to marry the necessary prioritization in those planning documents with the allocation of resources in yearly budgets. Referring back to those questions asked previously around achieving success in identified priorities and maximizing value for citizens, the question became: What kind of strategic planning framework and process would lead to the most compelling answers? 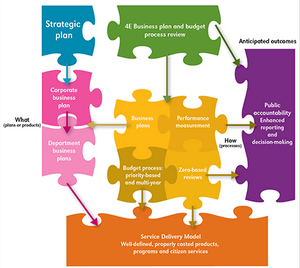 A gap was identified in the strategic plan as it existed in late 2013. The plan contained high-level priority areas that were open to much interpretation by administration in creating business plans and budgets. The strategic plan would benefit from another level of clarity in defining what success in those areas would look like for council. A facilitated session with council was conducted in early 2014, the outcome being goal statements for these priority areas. Once council agreed to these goal statements, the next (and perhaps most important) step for bringing strategic priorities to life and opening the door to value conversations occurred: council ranked these goal statements.

To get there, council was asked, “If you were directing the administration to allocate its last dollar, where would you like that dollar to go in order to achieve the most value for the citizen?”

Departments then crafted their own DBPs with goals that complemented the CBP. These DBP goals were intended to provide employees with direction on how there were expected to align their branch activities to further DBP goals, which in turn supported CBP goals and ultimately strategic plan goals and priorities. Staff-planned performance reviews were created with these activities in mind. Therefore, success at a staff level can be seen as contributing to the success of a visionary document like the strategic plan.

Strathcona County is now embarking on its second iteration of corporate and department business plans. Because the recently modernized Alberta Municipal Government Act has mandated that all municipalities move to a four-year operating budget and a five-year capital budget, the experience gained from Strathcona’s first set of business plans will be invaluable as the municipality looks to improve upcoming plans for the county. Lessons learned include:

• Do not introduce too many goals (more goals mean less can be done).

• Take your time; you are implementing a cultural change (you have been passing budgets successfully for years; it is necessary to provide a compelling reason for proactive change).

• Learn from others (you are not alone in this, and you do not have to look to change something that has been successful elsewhere). Encourage council to drive this change (it starts and ends with moving strategic priorities forward).

• Leverage the benefit of a ranking exercise.

For Strathcona County councils, the community, and organization, the impact of going through this journey has been immense. There is a new conversation being held between the public and elected officials. In a way never seen before, the organization can now share with council members and the community the details of how resources have been allocated to achieve success in identified priorities. Now, when a new initiative comes forward, administration is often being asked how this new initiative will advance prioritized goals. Using this approach, every level of the organization can see how they are a part of something bigger and how they are contributing to the organization’s success.

Strathcona County has delivered tax decreases for two years in a row: the result of reallocating resources toward priorities and “mining from within,” rather than adding at budget time. There is a very compelling case for maximizing value for citizen tax dollar by demonstrating support for true priorities.

To learn more about priority based business planning and PBB be sure to attend the 2018 PBB Bootcamp & Summit in Denver, CO this August!