"Cities do not become great by accident. It is the hard work of visioning, planning, and alignment that moves the needle from plan to action. To create a master plan is to look into the future of a city and imagine what tomorrow could be." - IMAGINE Kalamazoo - 2025 Strategic Vision and Master Plan

As your organization begins to see Priority Based Budgeting (PBB) for what it is, a tool to free up resources and dramatically realign them towards the Results that will create a better future for your community, you'll notice that attention ultimately goes back to the policy-makers. And the question in front of them centers entirely on "what Results" matter most for the success of your society?

What Result do we need to align our resources, in order to bring about the future that we dream of? If PBB is a tool to churn up substantial amounts of resources to redirect towards the services you wish you could start ("if only we had the money"), or enhance the services that are so desperately needed; then towards what end goals are we going to point these abundant resources you've discovered?

To illustrate in grand fashion how policy-makers are excelling in this arena, creating a vivid and clear vision of a spectacular future, we encourage you to look at the City of Kalamazoo's "Imagine Kalamazoo 2025 Strategic Vision and Master Plan."

What is the value of Imagine Kalamazoo 2025? According to the city, "The responsibilities of the city are wide-reaching: utilities, transportation, land use, housing, policy, regulation, and more. The "dots" don't always connect, as each group works to meet its own obligations with its own resources and goals. A strategic vision - common priorities, resources, goals and stories - provides the framework to connect those dots, to align and evaluate our policies and actions, and to make the most of our resources." 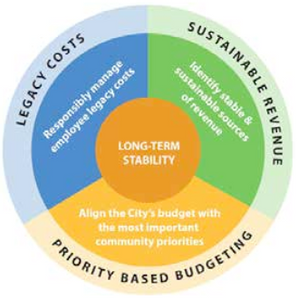 In Peter Theil's classic "Zero to One: Notes on Startups, or How to Build the Future" he argues that in order to create a better future, we need visionaries to imagine it and take action to bring it to life. "Our task today is to find singular ways to create the new things that will make the future not just different, but better - to go from 0 to 1" he says. "Everything important to us - the universe, the planet, the country, your company, your life, and this very moment - is singular."

Kalamazoo has endeavored to do just that, and the bold vision of the future they have created in their "Imagine Kalamazoo" document is rich with vivid clarity, and best of all it's compelling. "Imagine a vibrant, prosperous, and equitable city, where people want to live, work, and raise families. Imagine being a more beautiful and livable city each year, more innovative and connected. Imagine having more jobs and less poverty, and providing young people with the jump-starts they need in life."

Imagine Kalamazoo sets vision, and aligns resources to achieve it. However, the city has bold ambition and has taken extraordinary steps in establishing additional partnerships to not only ensure their vision is met, but greatly exceeded.

On Monday, August 21, 2017, the City established it's "Foundation for Excellence (FFE)." Catalyzed with an incredible $70.3million philanthropic donation from local residents, the intention of the FFE is to raise $500million by the end of 2019, in order to achieve massive aspirational goals set forth in Imagine Kalamazoo such as "ending generational poverty." (link to article Kalamazoo Foundation for Excellence gets green light. What now?)

In the September-October edition of the Harvard Business Journal, author's Susan Wolf Ditkoff and Abe Grindle write broadly about massive philanthropic initiatives, much like Kalamazoo's FFE. In their article, "Audacious Philanthropy" they write "Private philanthropists have helped propel some of the most important social-impact success stories of the past century: Virtually eradicating polio globally. Providing free and reduced-price lunches for all needy schoolchildren in the United States. Establishing a universal 911 service. Many of today’s emerging large-scale philanthropists aspire to similarly audacious successes. They don’t want to fund homeless shelters and food pantries; they want to end homelessness and hunger."

However, the author's go on to say, "but a growing number of these donors privately express great frustration. Despite having written big checks for years, they aren’t seeing transformative successes for society." (See Audacious Philanthropy article here).

Priority Based Budgeting doesn't create vision. The Mayor, City Council, City Manager and staff, and the residents of Kalamazoo created their vision in the incredible Imagine Kalamazoo Plan.

Priority Based Budgeting doesn't create a $70 million philanthropic donation (we wish it did!).

However, priority based budgeting in the City of Kalamazoo has contributed to both vision and the Imagine Kalamazoo Plan. Per the City’s Priority Based Budgeting webpage….. In 2016, the City continued efforts to implement Priority Based Budgeting. PBB introduced a new online tool which allows the city to easily manage all data and update programs, scores, and costs on-line. A review of the PBB program inventory resulted in a reduction of programs from 1088 to 514 with total direct program costs of $97.4 million and 610 full and part-time employees. This reduction was primarily due to the removal of redundant programs and combining programs across departments that were previously tracked separately.

During 2017, the departments will be identifying priority programs to measure outcomes and determine if the city is meeting the goals and objectives outlined in the new Imagine Kalamazoo 2025 Strategic Vision, estimated to be finalized in early summer 2017. This new vision will align with PBB by providing revised community result maps used for scoring. In preparation for the 2018 budget, all programs will be scored based on the updated community results, and staff will be using PBB to score and prioritize the city’s capital improvement projects.

The bold combination of Priority Based Budgeting, Kalamazoo's Imagine Kalamazoo 2025 and the Foundation for Excellence have shown how bold vision is created on a scale that Peter Thiel calls for in "Zero to One."

But as Ditkoff and Grindle make the point, sadly vision plus resources alone don't satisfy the equation.

In the article "City Assembles Tools for the Big Job Ahead" author Mark Levin writes: "Mayor Bobby Hopewell noted that while tackling huge issues like inter-generational poverty and shared prosperity are important goals, they will also require a lot of planning. At a City Hall workshop, Manager Jim Ritsema and his staff showed how when they combine commissioner input, the community input from Imagine Kalamazoo 2025 and put it through their Priority Based Budgeting matrix, they should come up with a plan that will not only make the best use of the money in the short run, but the long run as well."

Priority Based Budgeting is a tool. It connects the dots between vision and resources. And it measures the degree to which your resources aligned with your vision. It's proven an incredibly effective tool at churning up scarce resources, as it demonstrated clearly when valuable resources are out of place and misaligned (what has been described as the very definition of "pollution" - a valuable resource in the wrong place). 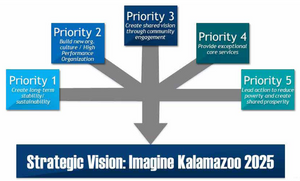 To see Kalamazoo use PBB as it is doing, it is very fulfilling. PBB was once described as a lens, no different than a pair of glasses. Whereas glasses are a tool to take information in the world, and translate it into a form in which eyes can make use of it, PBB puts into focus the degree to which your resources are aligned (or could be aligned more directly) with the vision a community attempts to bring to life.

It opens up an entirely new perspective on your resources, and Kalamazoo has shown how the pieces fit together - it'll be an incredible story to watch come to life! And it's nothing short of a fantastic vision for the future of all our communities.

Data-Driven Decisions through Priority Based Budgeting in Kalamazoo, MI!

"Data-driven decisions will be filtered through the Priority Based Budgeting process, bringing strategic alignment into everyday activities." - Kalamazoo 2018...