Why "High Cost of Government" isn't always a bad thing...


“Spending is not ‘right’ or ‘wrong’—it is what a community decides.” - South Jordan City Manager Gary Whatcott

A recent study performed by the Utah Taxpayers Association (2019 Cost of City Government report) ranked Utah's cities by government spending. The simple description for the report is “A snapshot of on average how much of each thousand dollars earned by a citizen is consumed by the city government in Utah.”

For its report, the Utah Taxpayers Association (UTA) then proceeds to compare the “highest-cost” versus the “lowest-cost” governments. The point of view expressed is that cities should avoid providing services for residents, abdicating the responsibility for private-sector solutions.

A finding in this report is that ResourceX priority based budgeting partner South Jordan City has the seventh highest cost of government in the state of Utah. A closer look reveals why being labeled as a city with a "high cost of government" need not always be a negative label, but actually a source of pride.

From our perspective in working with over 230 local governments across North America, South Jordan City is one of our top 5 most successful organizations in implementing and applying priority based budgeting (PBB).

In fact, they were recently recognized at our 2019 annual PBB Summit for "repurposing" over 11% of their annual city budget ($5.8 million dollars) from low priority to higher priority programs. For this incredible work, they were awarded a "Resource Optimizer" award.

Repurposing is fundamental to resource stewardship. The virtue of repurposing recognizes that the funds provided by residents, businesses and visitors are not infinite; they are precious and scarce.

With a community’s resources being in limited supply, investments into every service and every project require persistent and thoughtful evaluation and prioritization. The act of resource reallocation is thus is a two-fold triumph:

South Jordan City has been applying PBB for 4+ years. Resource Optimizer Award recipients were the first 5 PBB organizations having demonstrated successfully that they have repurposed over 10% of their budgets, freeing up the massive resources required to launch new and high-priority services, as well as enhancing current programs that need to grow.

As referenced before, here's how What Works Cities Director of City Solutions Clarence Wardell (The Adaptive Budget: How Cities Are Repurposing Funds to Invest in Impact) advocates and guides those new to repurposing.

How would you explain the value of repurposing to someone who is new to the concept?

"Repurposing helps cities reexamine their status quo. In many cases, if a city is in a good budgetary environment, unless there is a reason to question why a program or service has received funding, ineffective programs can continue to exist, even if they are decidedly not achieving the intended results for residents."

"In the government innovation space, we want cities to experiment with different programs and services to improve the lives of residents, but we know that not every program will work.

Repurposing at its core is about helping cities to constantly take stock of the resources that they are distributing across their programs and pushing them to get the best use of those resources — both in terms of what the evidence says about which programs work and what residents are saying about programs.

We are pushing cities to invest in resident-centered programs and services, and building the skill set of cities to do so on a regular basis. Repurposing is unique because it’s not just shutting down a program — it’s building the muscle to say:"

“There is an opportunity cost to every investment we make, and these are dollars that should be put toward programs that are helping us address our biggest challenges in a demonstrable way.”

After the Utah Taxpayers Association report (2019 Cost of City Government) was published, the South Jordan Journal decided to dig a little deeper. Their analysis produced an article written by Jennifer L. Johnson (Report Says South Jordan Has Seventh Highest Cost Of Government In State, But What Does That Mean?) that digs far past the numbers, looks into the city's approach to budgeting, and translates this impact to city residents. What they found may surprise you.

South Jordan City provides service oriented, responsible government, consistent with the community’s values, priorities and expectations for a high quality of life, enhancing the City’s fiscal health, providing professional and innovative services, and managing the City’s resources, while planning for the future.

Annually the City Council creates a budget that supports a comprehensive strategic plan focused on eight (8) key priorities. These key priorities bring life to the budget and provide an easy guide for residents to align their taxes to measured outcomes. The City has long honored its commitment of maintaining outstanding programs and services to the community by employing a highly productive team who are committed to providing excellent customer service as well as budgeting and expending funds in a fiscally conservative fiscal manner. 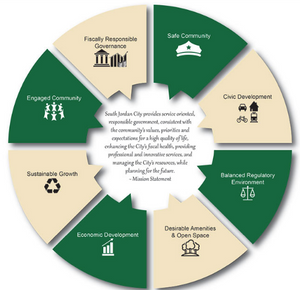 From South Jordan Journal article written by Jennifer L. Johnson (Report Says South Jordan Has Seventh Highest Cost Of Government In State, But What Does That Mean?):

"South Jordan administrative and financial management executives do not quibble with any of the data from the report.

Taxes, they assert, are quite logically, often higher in providing a level of service desired by a community.

SoJo City Manager Gary Whatcott uses the example of park strip maintenance. “It’s a question we ask the (city) council every time—how often do you want the grass to be mown?”

Another common issue is how long does a community want to wait before getting a response to a call about a fire?

Or, how long does a community want wait for a police officer or other first-responder to arrive at a location about a safety issue?

“Spending,” said SoJo City Manager Gary Whatcott, “is not ‘right’ or ‘wrong’—it is what a community decides.”

It’s all about the data

For the past 11 years, SoJo officials have surveyed residents to find out what they want from local government. For the past five years, as reported by the South Jordan Journal in April, the city has worked with public-opinion polling organization Y2 Analytics and has broadly publicized strong, mostly positive public opinion about the level of service the city is providing.

“What our residents comment about means more to me [than the UTA comparison report],” Whatcott said.

Whatcott says the city uses priority-based budgeting concepts. Such a strategy leverages the data from the surveys to inform a prioritization technology program, which guides how budget dollars are spent.

While Whatcott indicates SoJo initiated the program during recessionary times, the conservatively managed city has found the strategy to be useful in both lean and plentiful times.

Whatcott says these values help frame spending decisions. “If programs don’t fit in these categories—or accomplish these goals,” he said, “we should ask ‘why are we paying for it?’”

It’s really all about the local community

With regards to the Utah Taxpayers Association’s recent report finding SoJo being the seventh-highest-taxing city, UTA’s Nitz reminds: “What we try to do is look at this as a snapshot,” Nitz said. “It is virtually impossible to compare city by city.”

Impossible, and even desirable or overly useful?

SoJo Chief Financial Officer Sunil Naidu notes that taxation is “not a one-size-fits-all kind of thing.”

Colleague Don Tingey, the strategic services director for the city, agrees. “It goes back to why cities are formed, to begin with—unique city values that the residents want to preserve,” he said. Without the concept of localized values, Tingey argues, “[we would be] just one big city.”

South Jordan, according to Whatcott and these other staff members, prioritizes running the government with well-informed elected officials. Providing them with the best information possible then allows them to make the best decisions possible to represent constituents.

“Most officials are sensitive to their constituents,” Whatcott said.

Whatcott shares some of the city’s most controversial budgetary decisions—matters such as the development proposal to “trade one amenity for another” by axing the Mulligan’s family fun center and developing land for an entertainment complex that could have housed what is now Sandy City’s Hale Center Theatre.

“The public came out and said ‘No’—In fact, they said ‘Hell, no,’” Whatcott said. “We don’t want you to get rid of Mulligan’s. We like the look of green space.”

As a result of this profound constituent outpouring, Whatcott said, the city scrapped the lure of development and is now reinvesting in Mulligans and continues to tout its commitment to open space.

In a somewhat similar situation, the city also had appreciable resident input on the fate of the Glenmoor Golf Course, which now is being preserved in perpetuity, without the possibility of development encroaching on the decades-old green-space.

Today, the course is privately owned and operated and is a thriving national model of success, a win-win for residents to enjoy the amenities without carrying the ownership burden.

While SoJo city council meetings are frequently jam-packed when it comes to public comment on development issues, the chamber is notably, famously, annually quiet when it comes time to approve the city’s annual budget. At the meeting to pass this year’s budget, the elected and city officials on the dais outnumbered the audience in the chambers by more than two times.

The budget’s “sailing through” and, according to Whatcott, the low turnover of officials during election cycles indicate that—regardless of perceived alarmist reports about a high level of taxation in a city where the median income hovers around $100,000—“There are not lightning bolts going off. Most people feel OK.”

The “PBB Blue Print” states that for any imaginable future that a local government intends to bring about for it’s community, the resources required to fund that future can be cultivated through mining and repurposing resources already received, as well as maximizing new sources of income to the extent that it’s supported by the community.

The key question is this: do the ends justify the means? In other words, given the “ends” that the City of South Jordan is striving to achieve (the City’s Strategic Priorities), does it justify the resources required to achieve them?

“Spending,” as SoJo City Manager Gary Whatcott says so nicely in the article, “is not ‘right’ or ‘wrong’—it is what a community decides.”

Simultaneously, a local government has a responsibility to it’s people to pursue the priorities of the community in a way that optimizes resources. And that’s what makes the South Jordan story so powerful – for all of the ambitions of the community, the resources amassed to achieve such a high quality of life have come primarily from a combination of resource reallocation, as well as cost recovery from users of programs. 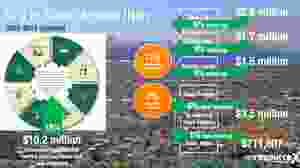 Applying PBB to optimize resource allocation to strategic priorities is appropriate for communities who strive to minimize the resources they amass in total for the good of their people, as well as for those communities who's population desires a highly ambitious set of outcomes.

For any given living standard set by the unique priorities of a community, have the resources been used wisely to produce it for the people. In South Jordan's case, the answer is emphatically yes!

To learn more about priority based budgeting and the power of repurposing, contact us to schedule a free webinar!