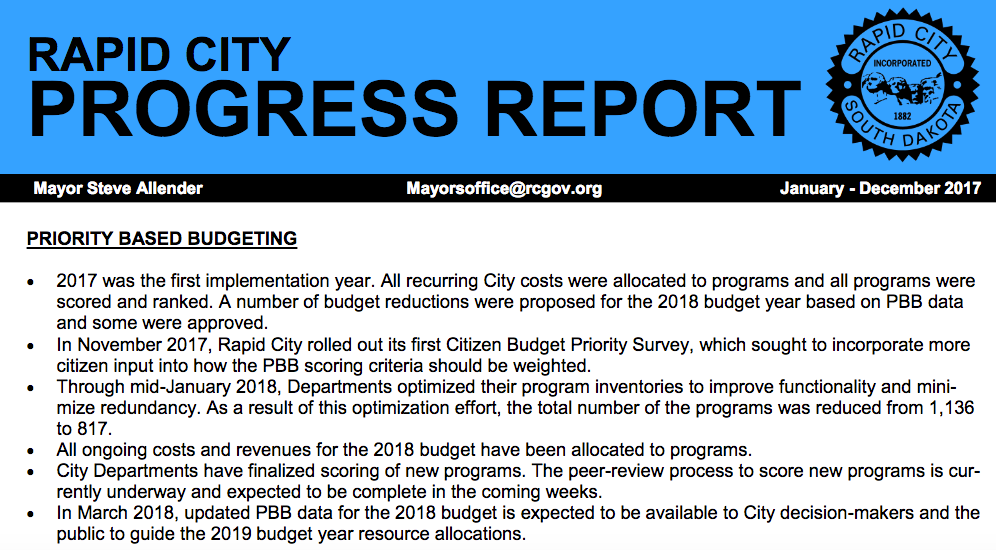 "Departments optimized their program inventories to improve their functionality and minimize redundancy. As a result of this optimization effort, the total number of the programs was reduced from 1,136 to 817."

Rapid City, South Dakota is the first city in the state to implement priority based budgeting (PBB). And the city has quickly become a national leader in their approach to implementation, application of PBB data, and citizen engagement through their Citizen Budget Priority Survey. 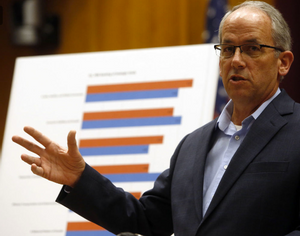 Per the City's Priority Based Budgeting page (Community Values. Citizen Preferences. Priority Based Budgeting), "In FY2017, the City of Rapid City began its full implementation of the Priority Based Budgeting (PBB) process, which is recognized as a best practice by leading government administration associations such as ICMA and GFOA. Unlike the traditional incremental approach to government budgeting, where the current year’s budget becomes the basis for the next year’s spending plan, the innovative PBB process allows communities to understand their core values and then budget according to these values.

Not only does the PBB framework allow our City to make better short-term resource allocation decisions based on the relative priority of the programs and services it offers, but PBB also provides a new way to link budget decisions to the strategic results and outcomes that our City wishes to achieve for the long-term. These strategic results are the seven core values that were identified in the Rapid City Comprehensive Plan that was developed through extensive stakeholder and citizen engagement and was adopted in April 2014."

Rapid City has ambitiously implemented PBB and the following milestones have been achieved:

November - December 2016: Development of Results Definition and Creation of Results Maps. The scoring criteria for the results were defined.

January - February 2017: Departments and peer-review teams scored all programs for their contribution to the City's core values and based on their basic program attributes such whether a program is mandated, what its reliance on the City is, what percentage of the population it serves, whether there has been any change in demand, and how much of its costs it recovers through program-generated revenues.

November - December 2017: Rapid City rolled out its first Citizen Budget Priority survey, which sought to get more citizen input into how the scoring criteria should be weighted. 1,665 completed survey responses were collected.

October 2017 - January 2018: Departments optimized their program inventories to improve their functionality and minimize redundancy. As a result of this optimization effort, the total number of the programs was reduced from 1,136 to 817.

February - March 2018 (expected): The updated PBB data for 2018 will be made available to City decision-makers and the public to guide the 2019 budget year resource allocations.

Now with the significant momentum and success of implementing and applying PBB data, in addition to the completion of the Citizen Budget Priority Survey, Mayor Allender delivered the Rapid City Progress Report on January 31, 2018, with an emphasis on PBB activities and initiatives. 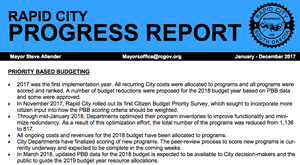 The Rapid City Progress Report includes an emphasis on priority based budgeting and the results from the recent Citizen Budget Priority Survey. The city has already successfully transitioned to program budgeting, which is the first step to harness a vast array of useful information to improve services and life in the city.

Next, the city reviewed and "optimized" their program inventory "to improve functionality and minimize redundancy." By optimizing programs, either through identifying cross-departmental redundancy, creating a more efficient solution to delivering the service, adjusting service levels, evaluating appropriate fee levels for services rendered, and/or partnering with community partners (public/private sector) to deliver the service (among many other optimization solutions), Rapid City provides a text book example of how to move from implementing PBB to applying PBB data for actionable decision-making.

Additionally, the city had clear goals when launching the citizen priority survey. As Rapid City Budget Analyst Sean Kurbanov states, ""The survey has multiple objectives. First and foremost, it's the validation of the PBB Results. We want to have citizens' preferences at the core of our scoring. By doing so, we hope to get program prioritization that reflects those preferences. This also helps with the buy-in by the Council and the public.

The second goal is to get the public's sentiments towards certain budgetary issues. As in most communities, decision- and policy-making may be influenced by smaller interest groups. We value citizen engagement and activism and are fortunate to have dozens of people come to Council meetings and contact their respective Council members or the Mayor, but, with this survey, we would like to reach out to a much broader cross-section of the population.

The budgetary issues include reviewing user fees for services as part of our 2019 budget development. We will undertake a comprehensive user fee study, which the City has not conducted for many years (if not decades) in some areas. We also hope to gauge citizens' preferences as they relate to various City-provided services. And finally, we hope this survey will be the first in a series of citizen engagement initiatives we'll have as part of our regular budget process. This first survey also has an open-ended question that will also help us determine what the most pressing issues are in the community."

Mayor Allender revealed the survey results during his Progress Report presentation. As the Rapid City Journal reported, "The results from the city’s Citizen Priority Survey, which was completed late last year and drew responses from 1,665 residents and nine of the 10 acting City Council members, were detailed during Mayor Steve Allender’s “Rapid City Progress Report” presentation Wednesday morning at City Hall.

Allender chose to focus on the budgeting process and citizen survey, which was mailed to about 3,000 randomly selected Rapid City households and was also available to be completed online. Overall, 80 percent of the respondents were homeowners and 75 percent have lived in Rapid City for more than 10 years, Allender said.

Asked how they would allocate an imaginary $1,000 in tax dollars to various city departments and services, respondents, on average, said they’d allocate $146 to “police services,” $137 to “street repair and maintenance,” $127 to “fire services,” and $78 to “street cleaning and snow removal.”

City Council members’ responses were separated from Rapid Citians and came in at $131, $138, $128, and $58, respectively, for the four aforementioned services.

City services with the lowest imaginary allocations by Rapid Citians included “public transit system” at $45, “land use, planning and zoning” at $33, “code enforcement” at $33, and “building permits and inspections” at $30." The full citizen priority survey results can be found here (pages 6 - 8).

Next steps for Rapid City include incorporating the citizen priority survey results into their ongoing program evaluation. And applying their updated PBB data for 2018 which "will be made available to City decision-makers and the public to guide the 2019 budget year resource allocations."

We are excited to see how Rapid City continues to apply PBB data to the benefit of citizens and the community, and applaud the incredible work coming out of the city.

What should Rapid City spend money on? Mayor talks budget and citizen survey.

Priority Based Budgeting in Rapid City

“The City has partnered with the Toledo Chamber of Commerce and ResourceX to create a programmatic view of the Toledo budget. This methodology provides a better... 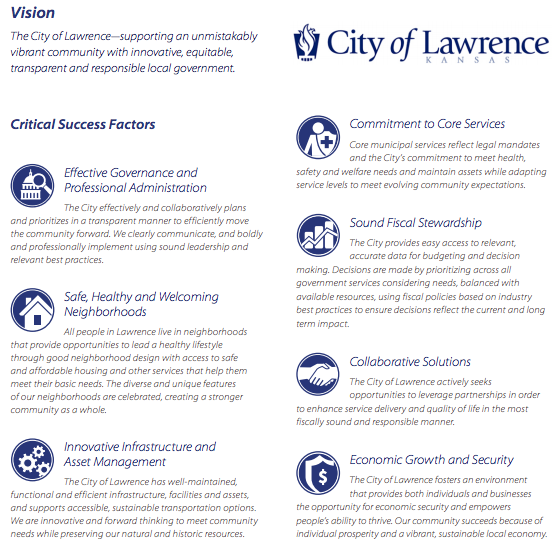 "In 2018, Lawrence implemented Priority Based Budgeting (PBB), an approach to budgeting that assesses the desired results of a community against the programs the...